Marketing - Learning to skate before you play Ice Hockey

My University, Northeastern, below, wins 'the Beanpot.'

2018, 'The Beanpot' is a favorite tradition in Boston, Massachusetts, USA, where I lived for ten years and went to college. It's an Ice Hockey Tournament between Boston University, Boston College, Northeastern University (my college) and Harvard. 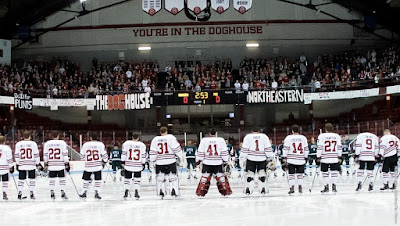 Jack, my ten-year-old son, is learning to play Ice Hockey. Of course, first He's had to learn how to skate. No point teaching him how to use his hockey stick to hit a puck into the goal, when he can barely stay on his feet on the ice.

So every week we go down to the Ice rink in Bayswater, London, and he gets to skate for two or three hours. Last week, we bought him some Ice Hockey skates and had them sharpened.

- Initially, he was actually a lot more unsteady on his feet, as he adjusted to the new Ice Skates.

I see this effect when we initially bring digital transformation to Marketing or start to use more sophisticated CRM.

However, within a few hours, Jack was actually skating faster. I timed him, and he was about a quarter more quickly around the rink with the new skates.

8am on a Sunday morning he starts his Ice Hockey classes - Two hours each week. That'll be the big test. Can he stay on his feet when he's trying to score a goal and he has competitors snapping at him on all sides?


My son, Jack, at his first Hockey class

Our coach, wearing the Boston College shirt, is from Boston, where Jack was born.

A lot of companies can't skate at all, but they want to be Wayne Gretzky (a famous Ice Hockey player, who won a lot of championships) within, let's say, six months.

- and often, when they're not skating like a superstar after six months, they change their trainer

As a Marketing leader, you could tell your leadership team that We will achieve some notable victories, but 'first, we need to learn to skate around the rink without falling on our behinds'.

Of course, that doesn't sound very good. Some Marketers skate around the issue and say 'Sure, we can do that. But we do need to do x, y, z first' and just hope that this expectation will go away.

But the truth is that digital marketing is hard. It takes a lot of time, testing, experimentation. Yes, it takes money too! It's also not something that works with constant micromanaging.

You see gradual, incremental improvement over time, with a lot of work.

You will also see better and faster improvements when the entire company is entirely behind the marketing efforts.

-but frequently that does not happen.

I know it's a pain in the ass to hear this -

Marketing automation and analytics are the same. So why do a lot of startup CEO's expect this sudden, dramatic change in one month?

Impatience? Frustration? Lack of thought? These are all possibilities for their desperation. But I believe their problems stem mainly from not understanding how Digital Marketing works.

The standard rules of business often simply don't apply to startups.  Just like the world of Ice Hockey, the world of startups is crazy and chaotic. Sometimes fights break out in the middle of the action. Sometimes the action just carries on regardless. It's actually amazing how similar the two worlds are!

Marketers in the start-up industry need to start being more honest and say 'sure we can achieve some fantastic results. But it'll take a lot of time, commitment, effort and yes, some money too.
In addition to the many challenges that startups face, Marketing leaders face additional ones. The industry is in one of it's toughest phases right now
- 80% of CEOs are unhappy with their Marketing heads. That percentage is even higher in startups.
Even in incredibly successful startups I've worked at, like $18 Billion market-cap Nasdaq listed Zscaler, we went through three CMO's in just two years! Two other startups I worked at, change their entire marketing team roughly every six months.

'I have nothing to offer but blood, toil, tears and sweat' (Winston Churchill) is a robust but effective message.

- But it's also a sobering message to hear. I have a lot of empathy with you as a Startup founder and CEO. I really want to tell you what want to hear. But I think it's better for both of us in the long run, to be honest with you.
- Then we can achieve some incredible results, working together!
For further reading on this topic, why not check out this excellent article 'The Trouble with CMO's' in Harvard Business Review.
on December 24, 2018

Wow what a great blog, i really enjoyed reading this, good luck in your work. Luxury Branding Services UK

Interview with Bela Hatvany, who has sold his companies for over £300 Million.

Rudy Parker
4-time Startup-to-IPO Veteran who creates Sales revenue for tech companies. The combined value of these three startups I've worked at is in excess of $70 Billion; A marketing executive who has worked in Finance (Bank of America, Bryant Park Capital), News (ABC News) & Software (Nielsen, Zscaler). I have been married to my wife, Catherine, for fifteen years. Catherine is a talent acquisition expert, who worked at Mckinsey for four years and went on to run European Talent Acquisition for the leading managed internet provider, Akamai Technologies. Catherine is currently a Director of Human Resources at Epredia. I lived and worked in the USA for ten years (Boston, Massachusetts, New York City, New York), and then We moved back to my hometown, London, England, in 2015.