The Economics of Persistent Slumps

This week I went with a friend to the Philips lecture  at The London School of Economics and Political Science (LSE) with Professor Robert Hall of Stanford University, originator & author of ‘The Flat Tax’   & one of the founders of Macroeconomics (author of one of the first books on the subject and now the standard University textbook on Macroeconomics )

The gist of the lecture was how productivity has declined in the USA. Areas of concern included the rapid fall in the Labour participation rate, which has now started to affect women (who previously were increasing in the labor force quite rapidly) too. 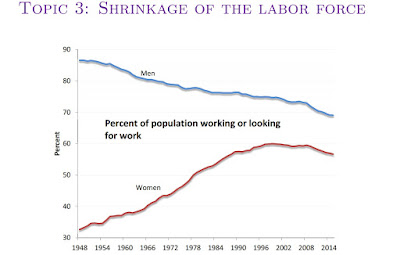 The biggest surprise here is that almost all of the decline in the Labour force is in the top levels of income and education.

Professor Hall speculated about a number of reasons for this. One rather novel one, was that fifty or sixty years ago, there was very little in the way of entertainment. If you chose not to work, even with a high income, life could be quite dull. These days there are a variety of interesting pursuits, that can occupy people all their life, without them having to work.

It would be interesting to pull a chart of video game use in the last thirty years and match it with the fall in work participation rates for high-income youth.

Another interesting chart to look at would be the increase in benefits and the fall in the work participation rates. My suspicion is that a lot of people claiming benefits are not truly unable to work.

I myself had a medical condition, that was classed as a disability for seven years. I could have claimed disability benefits for it. Fortunately, I worked through it and now I'm healthy again.

The toll on one's self-esteem of claiming money for doing nothing is rarely considered when debating the government benefits system. 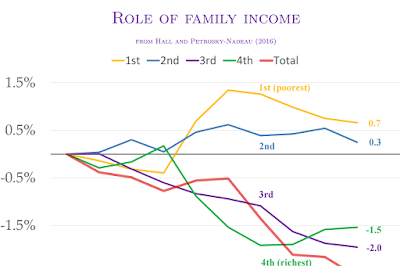 Professor Hall calculated that US GDP would be approximately 15 percentage points higher if this and a few more minor issues were addressed. He was only covering the US in his lecture. However, I'd imagine these issues with productivity will only be worse for some of the other developed countries if you look at this chart below. 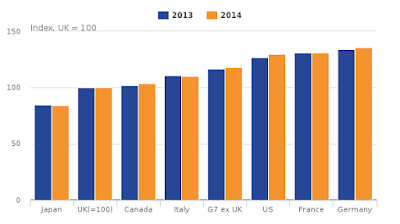 We rounded off the night with dinner at The Delaunay. 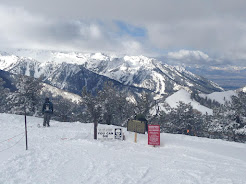 GMAT: You need a score of at least 600 to get into a good MBA Program. 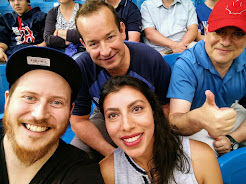 Rudy Parker
Marketing executive who has worked in Finance (Bank of America), Broadcast Journalism (ABC News) & Software (Visual IQ Nielsen, Zscaler). I lived and worked in the USA for ten years (Boston, Massachusetts), and then moved back to my hometown, London, England, in 2015. My wife Catherine is a Director of Talent Acquisition, who has worked at Mckinsey, Deloitte, Bain, Boston Consulting Group and Akamai. We've been married for 17 years and have a 13 year old son, Jack and a 15 year old daughter, Charlotte. My wife is an American and both my children were born in the US.